To put the answer to this question in technical terms, the difference between mediation and arbitration is described as: “A mediator normally has no authority to render a decision. It’s up to the parties themselves — with the mediator’s help — to work informally toward their own agreement. An arbitrator, on the other hand, conducts a contested hearing between the parties and then, acting as a judge, rends a legally binding decision.” (google search results)

In other words, mediators work with the parties involved and let them come up with different possible solutions to the conflict, while making suggestions and trying to find solutions to the underlying issues that the parties may not discuss with a mediator, but are nonetheless present. At the end of the mediation sessions, the parties involved usually feel more in control of the outcome of the sessions and what they need to do in the future in order to maintain a peaceful relationship with the other party. Arbitration is different in the sense that though the arbiter will still hear both sides of the conflict and talk to both parties, the parties themselves don’t have as much control over the solution to the conflict as the arbiter makes the final decision as to how the conflict is to be resolved. 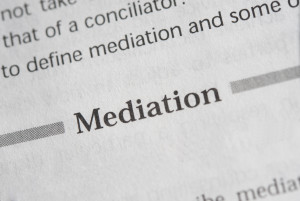 Another major difference between the 2 different conflict resolutions is that with mediation, the decisions that are made by the mediator and the parties involved are not legally binding, they are more just a formal understanding between parties as to how their conflict will be resolved. With Arbitration, the arbiter makes the final decision and their decision is legally binding and must be followed by both parties if they don’t wish to suffer the consequences of not following a legally binding document.

When parties are looking for a way in which to resolve their conflict peacefully without the extra expense and time involved in a trial, there isn’t a right answer for everyone as to whether they should go with mediation, arbitration, or even try to settle their dispute in a settlement conference. The decision over which type of conflict resolution they want to try is ultimately up to the parties involved and what they feel would work best for their specific case and what they are trying to accomplish.

Throughout this article we have discussed the differences between mediation and arbitration and what would potentially work better for each individual case. Before deciding upon one specific form of conflict resolution, it is important to do research into each different form and decide which one is right for the type of conflict that the parties involved have to resolve. Mediation isn’t right for every case, and neither is arbitration, they are just two different forms of resolving a conflict that may work better than taking the extra time and money to go to trial. For more information about mediation, go to CAMS Mediation