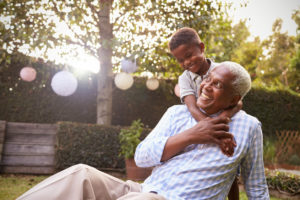 In the majority of custody situations, parents make decisions for their children and have physical custody of them. However, there are some situations where grandparents may be able to obtain custody of a child. You may automatically be thinking that the only time that a grandparent can gain custody is if the parents have passed away, but this is not the case. Today we will share the ways in which grandparents can receive custody while parents are still alive, and after they’ve passed away.

When Both Parents Are Living

The problem in these cases is that, even though a grandparent may want custody, this does not always mean that they will automatically obtain it. Other parties may be fighting for custody as well if they believe they are most fit to care for the child. If the grandparent has been acting as the child’s parent for years before the custody hearing, then usually they will gain full custody. However, in the end, the courts still look at the best interests of the child.

After the Death of Custodial Parent

If the custodial parent dies, usually the court will look at the other parent for custody decisions. However, if the other parent has not been involved in the child’s life or is deemed unfit, then they may not be the best option. It may work in a grandparent’s favor if the child was previously living with the grandparent, if the parents left a will, or the child says they want to live with their grandparent. The courts will look at these factors as well as the age, health, and finances of the grandparents.

As you can see, many factors are involved in these very specific cases of custody. It is important to understand how you play a role in all of this when you are a grandparent who wants to receive custody of your grandchild. Call us today for more information on how we can assist you.